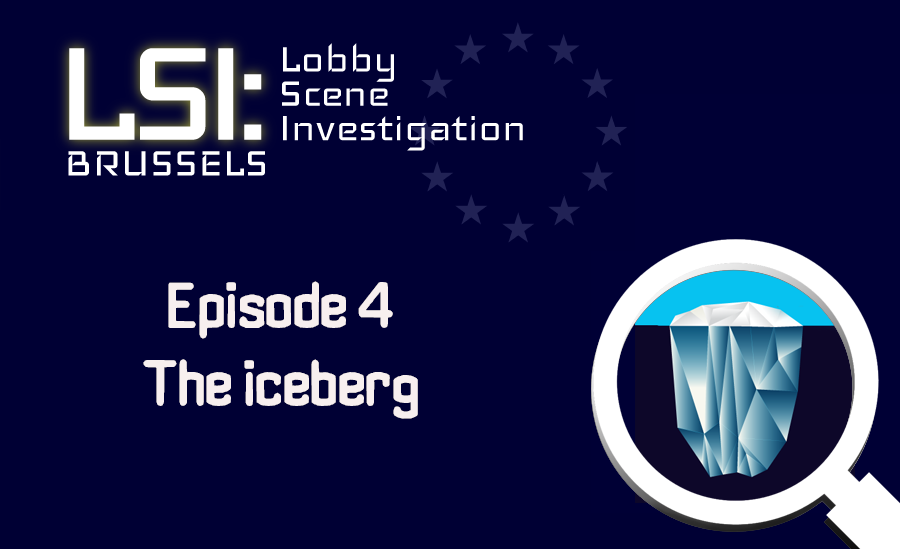 Author:
Margarida Silva, Corporate Europe Observatory
- Previously on LSI: Brussels -
Is the EU at risk of being captured by the influence of corporations (just think of Dieselgate)? Our team of agents is trying to solve this case by looking at the Transparency Register: while reform was promised, the result might be less transparency as the Commission tries to redefine what is lobbying and the Council still tries to make its mind up on the issue.

The European Commission's department regulating EU financial markets (DG FISMA) is exemplary for the institution's biggest transparency loophole: 80 per cent of its lobby meetings are not covered by lobby transparency rules.

From January to July 2016, DG FISMA, hosted a whopping 519 lobby meetings. Of these, 16% were held by the top officials in the department, including the Commissioner, cabinet members and the director-general. The remaining 81 per cent were hosted by civil servants ranking below the level of director-general (the other 3 per cent involved government entities or central banks).

Why does this matter? Since 2014, the Commission top officials have to pro-actively disclose all their lobby meetings and refuse meetings with unregistered lobbyists.

This rule was meant to increase lobby transparency but also to compel lobbyists to join the voluntary EU Transparency Register. The motto is simple, “no registration, no meeting”.

There are still problems with this initiative as the #Oettingair painfully highlighted. But, to an extent it worked. Take for example Goldman Sachs, which for years had lobbied while unregistered, and then found itself forced to join if it was to maintain its access.

As a side effect, the registration requirement has enabled the public to see which lobbyists enjoy the most meetings, at least with the officials at the very top, exposing a pattern of strong corporate dominance across several departments. Former Finance Commissioner Jonathan Hill‘s remarkable corporate bias (about 87% of all his lobby meetings) is one of many poor track records.

Commission transparency rules only cover a small share of meetings

Transparency improvements resulting from the “no registration, no meeting” rule would surely be a good reason to expand its application to all lobby meetings at the Commission, but those with lower-level officials have remained exempt.  Only the most senior 250 employees of the estimated 30.000 Commission staff are covered.

It leaves 99 per cent of Commission as prime targets for lobbyists, especially for those wanting to conduct their work in the absence of public scrutiny. By far the biggest loophole in the Commission’s lobby transparency efforts.

It is not surprising then that 13 per cent of the corporate meetings with lower-level DG FISMA staff were with unregistered lobbyists. We found the same trends DG Trade, where not even members of staff negotiating trade deals like the EU-Canada Comprehensive Economic and Trade Agreement are covered by the transparency rules. Unlike other Dgs, these two departments have at least recorded internally and released their meetings data – enabling such an assessment.

Commissioner Timmermans, responsible for transparency issues, has repeatedly opposed an extension of the “no registration, no meeting” line,  claiming that this level of accountability should be restricted to actual decision-makers.

The relevance of lobbying at the lower Commission levels cannot be understated, however. ”Get in early!”, is a well-known mantra for lobbyists, taught in  public affairs courses the most efficient lobbying takes place at the early stages of the policy-making process, ideally before there is even any paper trail.

“The ideal situation is to speak to the draftsperson himself, before he has even written the first word of his proposal. At this moment your capacity for influence is at its maximum”.

Unlike Timmermans, Guéguen is acutely aware that decisions are made at all levels of the policy-making hierarchy, from framing to the identification of potential stakeholders. These are often crucial decisions.

And we know that many policy proposals from the Commission were heavily influenced by corporate lobbyists at the early stages of their evolution, including the Trade Secrets Directive or the regulatory cooperation chapter in the TTIP talks.

Corporate power is able to prosper there, since less transparency hinders public scrutiny and civil society groups tend to not have the resources to undertake dedicated lobbying at this level. The media, at the same time, often show little interest in policies ‘under construction’, which are still a long way from being voted on or enacted.  Academic studies confirm that business influence tends to be higher when there is less public debate and less outright political conflict. The lack of proactive transparency and an absence of effective rules just worsen the situation.

Commissioner Timmermans has also argued that the “no registration, no meeting” rule’s exemption of civil servants is meant to protect them. This doesn’t hold up.

Civil servants often face the difficult job of putting together big pieces of legislation, mostly under time and resource pressures. In this context, transparency and ethics rules will only protect, not hinder them. Introducing a “no registration, no meeting” rule would ensure that there are clear expectations on all sides - and better enable staff on the lower Commission ranks to reject aggressive lobbying attempts, for example bylobbyists who refuse to disclose which client they represent.

Currently, the only genuinely discernible reason for the Commission to insist on excluding civil servants from the transparency rule is the institution’s unwillingness to progress its own transparency efforts before Parliament and Council have caught up. it is certainly true that for the voluntary register to be as meaningful  as possible, all three institutions adopt the “no registration, no meeting” rule.

But there is a clear imperative for the Commission to implement it in its most comprehensive form as soon as possible and lead the way, rather than  use it as a political bargaining chip.

This blog first appeared on EurActiv on 28 November 2017.
This is the fourth in ALTER-EU's blog series Lobby Scene Investigation Brussels.