ALTER-EU's new campaign launched with transparency debate at the Parliament 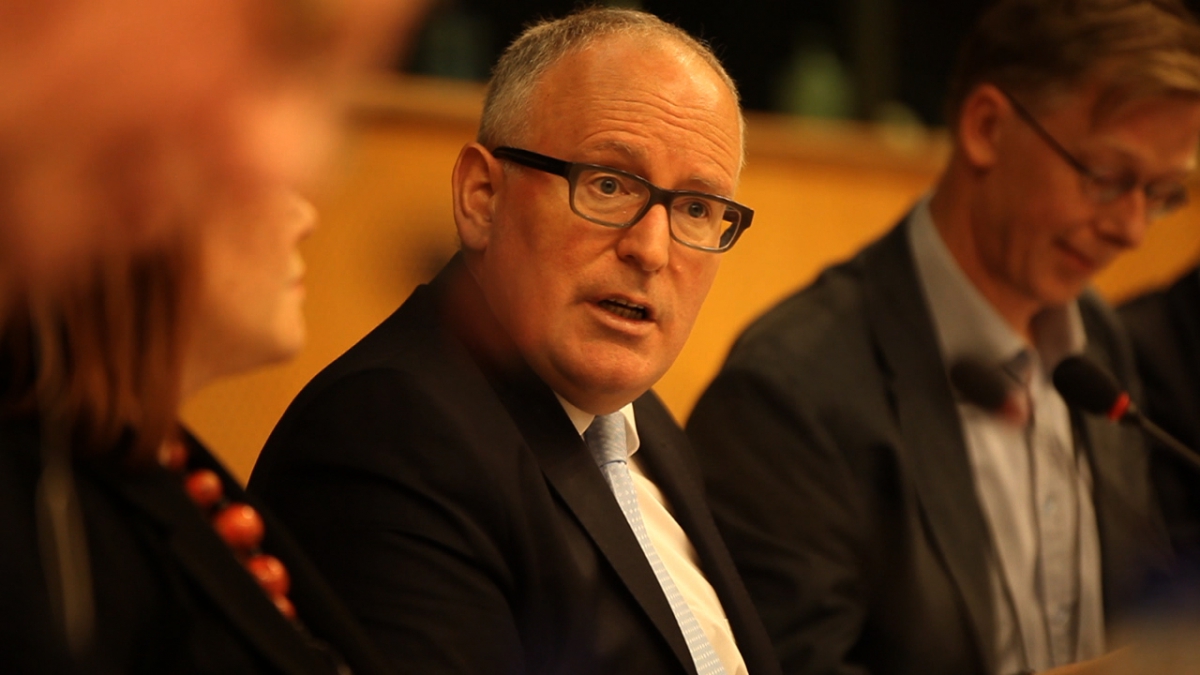 Find out what Frans Timmermans and other speakers said at our European Parliament debate on lobby transparency.

Held at the European Parliament, panellists included ALTER-EU members and officials from the Commission, Parliament and Council. Here, Commission Vice-President Frans Timmermans renewed the Commission's commitment to a mandatory lobby register but postponed submitting a proposal to the Autumn. Timmermans also rejected the possibility of trying to do so via legislation, instead choosing to implement a sanctions-based system for the unregistered and those who submit false information.

Facing a fully packed house, the Vice-President explained that he would look to reform the current register via an Inter-Institutional Agreement (IIA) which he hopes will cover the Commission, the Parliament and the Council. These type of agreements can only create binding rules on the European institutions and its officials, not external actors such as lobbyists. This means that lobbies would still not be compelled to sign-up. Its mandatory character would therefore be “de facto”, based on a set of measures designed to incentivise registration (or penalise non-registration), for instance, forbidding officials from meeting unregistered lobbyists and banning unregistered lobbyists from expert groups.

Timmermans dismissed the legislative approach advocated by ALTER-EU and the Ombudsman, saying that it would take too long to get it approved in the Parliament and in the Council. Members of ALTER-EU reminded him that this has been the standard response they have heard since the beginning of this process, more or less a decade ago. Olivier Hoedeman from Corporate Europe Observatory (CEO), also told the Vice-President that the success of a “de facto” mandatory system will require more and wider sanctions. Otherwise, lobbyists that prefer to work in the shadows will be able to continue doing so. Disappointingly, Timmermans did not announce any concrete new measures, but said he first wanted to wait to see if the measures introduced in December 2013 are sufficient. The ban on meeting with unregistered lobbyists introduced five months ago, however, only covers the top 300 Commission officials, whereas most lobbying meetings happen with Commission officials at the level just under these 300 top officials.

A welcome development was Timmermans' promise to toughen up the enforcement of the current rules to those who wilfully submit incorrect information saying that “If you lie to me you are no longer welcomed in my office”. He also claimed that the measures adopted by the Commission, such as the ban on meetings, should now be adopted by the Parliament.

Also speaking at the event was the Parliament's Vice-President Sylvie Guillaume who rejected this claim arguing that the process towards transparency should not involve throwing “suspicion” at the Parliament. Guillaume highlighted that a lot of progress has been made in the past years but it has not been enough to “burst the Brussels bubble”. She criticised the fact that the Commission has not deployed enough staff and time to checking and correcting the information on the register.

ALTER-EU's work has already shown that there are a large number of incorrect entries in the register and that, without adequate control, lobbyists can submit false information and avoid sanctions. This was highlighted by the example of Goldman Sachs who appeared to only sign up to the register when it was faced with new rules which prevent unregistered lobbyists from meeting with senior officials. However, in its register entry, Goldman Sachs claimed to spend less than €50,000 in 2013 on lobbying activities in the EU but research has found that this would appear to be a gross underestimation. LobbyControl, Friends of the Earth Europe and CEO have already submitted a complaint about this to the EU lobby register secretariat. The Vice-President promised to follow up on it and to “act duly”. (NB on 27 April, Goldman Sachs updated their lobby entry and recorded a lobby spend of €700,000 - €799,999 for 2014)

Another panellist Pam Bartlett Quintanilla from Access Info Europe also pointed out that contrary to the guidelines, registrants are not specifying the precise dossiers they work on, instead choosing to submit generalities. This was made obvious by the fact that when searching the register for lobbying on TTIP, a major lobby issue, only 58 organisations mention it.

Inga Reine, head of institutional affairs at the Permanent Representation of Latvia to the EU which currently holds the rotating presidency of the Council, pointed out that there are genuine legal problems that currently limit the engagement of the institution, referring to the fact that the work of the Council, including the permanent representations of national governments in Brussels, falls under national legislation. Reine assured that the Council is eager to find solutions and is currently discussing the possibility of joining the Inter-Institutional Agreement.

MEP Sven Giegold, who is responsible for drafting a key Parliament report on lobby regulation, argued that while negotiations on an IIA were important to make fast progress in rules for the European commission and Parliament, the Commission should also prepare a legislative proposal for a mandatory register. This slower track is needed to overcome the legal obstacles that currently prevent the Council from being fully included in a mandatory lobby transparency register.

Olivier Hoedeman from Corporate Europe Observatory closed the debate noting that the only way to achieve this is by creating stronger public pressure, both at the EU level and in member states. ALTER-EU's new campaign aims to ensure that the reformed transparency register will provide high-quality information and that it will reach all lobbyists working in the EU. Citizens need to know who these lobbyists are, who they work for, how much they spend, and what laws and initiatives they are working and how they compare to public interest. Only then can unbalanced representation be exposed and create a far more balanced policy-making and decision-making process. If lobbyists are acting unethically or unscrupulously, lobby transparency can help us to reveal that too.

There is a unique opportunity now to make strong and fast progress in EU lobby transparency, but there is also growing awareness of the need for lobby registers in the member states - with this campaign we hope to bring powerful momentum to reinforce progress on both levels

This is why ALTER-EU is now calling for:

You can listen to the debate here