Are MEPs too 'free' to be accountable? 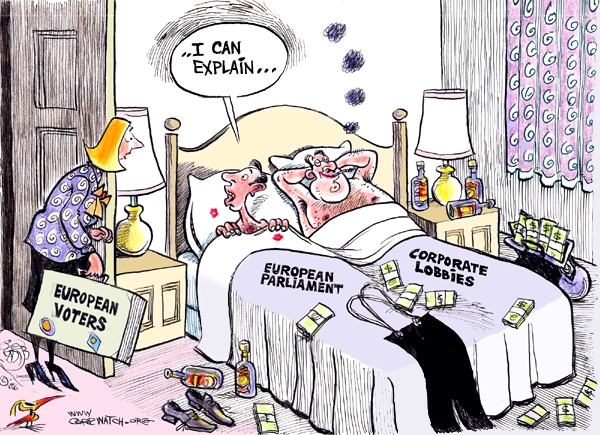 The European Commission proposed to reform the EU Lobbying Transparency Register in September 2016, promising to make it mandatory across EU institutions.

But, when it comes to lobbying transparency, the ball is now in the European Parliament's court.

On Wednesday (6 June), the parliament’s "contact group" – the two MEP negotiators Danuta Hübner and Sylvie Guillaume, plus members from each political group – will discuss their draft negotiating mandate for the register one more time.

If nothing changes from the current draft, it will be a meaningless paper, lacking any solid commitment from MEPs to introduce new incentives for lobbyists to join the transparency register.

Traditionally, the parliament had been a staunch supporter of a robust transparency register. It was the EU parliament, and not the commission, that first introduced some conditions on lobbyists: the obligation to register to obtain an access badge was agreed by the parliament back in 2010.

Moreover, MEPs have always emphasised the need for a binding register, backed by the force of law, in their negotiations with the commission. Such a register would be binding on lobbyists and allow the institutions to impose sanctions on them in cases of non-compliance.

But the commission was far less aspirant.

Instead, the EU executive body proposed an inter-institutional agreement – which would bind the institutions, but not lobbyists – based on a set of incentives to get lobbyists to register and comply with the rules.

As a first step, in 2014, EU commission president Jean-Claude Juncker introduced the rule that commissioners, their cabinet members, and directors-general should only meet with registered lobbyists, and must publish all their meetings online.

This sounded good, but it had a massive loophole: the remaining 30,000+ commission officials were left unaffected by these rules.

There seems to be a consensus now between the three institutions about this low-key, unambitious, incentive-based approach.

We disagree with it and will keep up the pressure for a legally-binding register in the longer-term, as this is the only way to make the register – with its flawed data and massive enforcement problem – more effective.

If the institutions are serious, however, about increasing lobbying transparency via their soft approach, they will have to take stock of their own responsibilities and really put strong incentives in place.

But sadly, none of the three institutions seem willing to strengthen their requirements in their own contact with lobbyists.

The parliament's attitude is particularly disappointing, considering its prior record.

Back in December 2016, a majority of MEPs voted to adopt the systematic practice of meeting only with registered lobbyists. That was a step forward, but is widely interpreted as non-binding on MEPs. Lobbyists wishing to avoid scrutiny would easily be able to evade such a voluntary rule, which not all MEPs apply.

Many MEPs across the centre-right, centre-left and liberal groups now argue that they cannot aim for a clear and enforceable ban on MEPs meeting unregistered lobbyists, as it would be incompatible with the "free mandate" principle enshrined in EU primary law.

The free mandate principle guarantees that MEPs can vote and speak independently from any instructions – from their voters, or their parties, and so on. The argument goes that this also implies the freedom to meet whomever they feel they need to, to stay informed.

This does not sound very convincing to us. We understand that independence from any external instruction is a fundamental principle of democracy. But there are other important values and principles too – transparency being one of them.

Does the "free mandate" really prevent MEPs from introducing accountability and transparency obligations?

Would asking lobbyists to register for a meeting and play by the rules really be such an attack on the freedom of MEPs?

And just to reject a red herring argument: meetings with citizens from MEPs’ constituencies, or random encounters, are not and have never been covered by the register. Meetings with whistle-blowers or others who, for reasons of personal security, would not want their name in the public domain, could also easily be exempt.

And if a clear ban is really asking too much: why not simply publish MEPs’ meetings with lobbyists online? Then the public could check who MEPs are meeting. This would be compatible with the "free mandate" of MEPs and, in our era of electronic calendars, would not really pose too big of an administrative burden, either.

Yet the idea of becoming more transparent and accountable to their electorate seems to be scary to many MEPs, and is being considered far more as a risk than as an opportunity.

This is a particularly baffling position for MEPs to take, especially when considering the distance between the work of the EU parliament and the home constituencies, which is often reflected in the poor turnouts in European elections.

We have witnessed a frustratingly reclusive attitude through the whole discussion phase of the mandate.

Civil society was only invited, reluctantly, to contribute to this important discussion after an open letter to the parliament was signed by 100 civil society organisations and the mandate had been kept secret from us.

MEPs must stop hiding behind legalistic excuses and commit to something meaningful.

It's time for MEPs to leave their defensive mode and to stop hiding behind legalistic excuses.

Both of the MEP negotiators (Hübner and Guillaume) have signed two different pledges on lobbying transparency in the last European elections, as did many other MEPs.

It is time for those politicians to live up to their pledges and to persuade their colleagues to implement a clear ban on MEPs meeting with unregistered lobbyists and to ensure that MEPs publish their lobby meetings.

If the parliament does not act, MEPs will lose the moral high-ground vis-a-vis the other institutions in the debate on EU lobbying transparency.

And the result: the EU lobbying register will remain a very flawed transparency tool.