Time running out for lobby transparency: citizens call for action

More than 10,000 people have signed an online petition to be delivered today [1], urging MEPs to stand up for lobbying transparency in the European Union by supporting the transition to a mandatory lobby register. [2]

The petition will be handed over by members of the ALTER-EU coalition just as the group on the revision of the EU Transparency Register prepares to meet to make crucial decisions on Wednesday 13 November. The working group includes MEPs as well as Commissioner Maroš Šefčovič, and it meets under the leadership of the Parliament's Vice-President for Transparency issues Rainer Wieland MEP. [3] 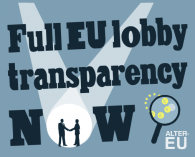 Campaigners are demanding the transition to a mandatory EU lobby register with meaningful data, alongside additional measures to deliver transparency in the interim period before a new register is up and running. [4] Campaigners are also calling for the register to adopt a clear and enforceable ethics code for lobbyists. In May 2011, MEPs voted to support the transition to a mandatory lobby register although, more than two years on, no progress has been made towards this goal. [5]

Olivier Hoedeman of Corporate Europe Observatory who will present the petition on behalf of the ALTER-EU coalition, said: “Right now, many lobbyists boycott the voluntary EU lobby register. They include some of the world's biggest corporations as well as virtually all law firms that lobby on behalf of industry clients. These lobbyists benefit from lobbying in the dark. Enough is enough – it's time for a mandatory lobby register".

Nina Katzemich of LobbyControl, an ALTER-EU coalition member, said: “Time is running out to tackle secretive and unethical lobbying and it will require a lot of political will from both MEPs and the Commission to do so. So far, the mood music coming from the review group has been disappointing - it will be a big failure if the group only recommends some minor tinkering with the technical details of the register. We urge the members of the working group to seize this opportunity to support the transition to a mandatory lobby register.”

The current EU transparency register, which is voluntary, is highly flawed. Thousands of lobbyists boycott the transparency rules (including ABN-Amro Bank, Adidas, Delhaize, Goldman Sachs, Janssen Pharmaceutica N.V., Rio Tinto plc, Time Warner and many others) while many of the companies and organisations that do sign up, fail to provide accurate and up-to-date information on their lobbying activities. [6]

The petition will be presented to MEPs on the working group at 12.40 sharp, ASP entrance (Place Lux), European Parliament, Wednesday 13 November and the press are invited to attend. Photos will be immediately available on the ALTER-EU website: www.alter-eu.org

[1] The text of the petition can be found in English, German, French and Spanish. Across all language versions, over 10,000 people signed. In a recent opinion poll, 80 per cent of the citizens questioned in six EU states were in favour of a mandatory EU lobby register: http://www.access-info.org/en/european-union/496-meps-sent-infografics

[2] ALTER-EU is a coalition of about 200 civil society groups, trade unions, academics and public affairs firms campaigning for lobbying transparency in EU policy-making.

[3] More information about the high level group reviewing the register can be found here: http://www.europarl.europa.eu/RegData/bibliotheque/briefing/2013/130538/LDM_BRI%282013%29130538_REV1_EN.pdf It is expected to conclude its work this month and to make recommendations for the Parliament and Commission to consider.

[4] Such interim measures would help to make the current register de facto mandatory and could include a commitment that Commissioners and Commission staff would not meet with, or attend events organised by, unregistered lobbyists.

[6] ALTER-EU has compiled significant evidence of the flaws in the current EU Transparency Register. Its most recent report “Rescue the register” can be read here: http://www.alter-eu.org/documents/2013/06/rescue-the-register