One month after the European Parliament voted to ban pesticide manufacturer Monsanto from entering Parliament premises, 24 transparency and environment groups remind them to implement their decision as comprehensively and effectively as possible. 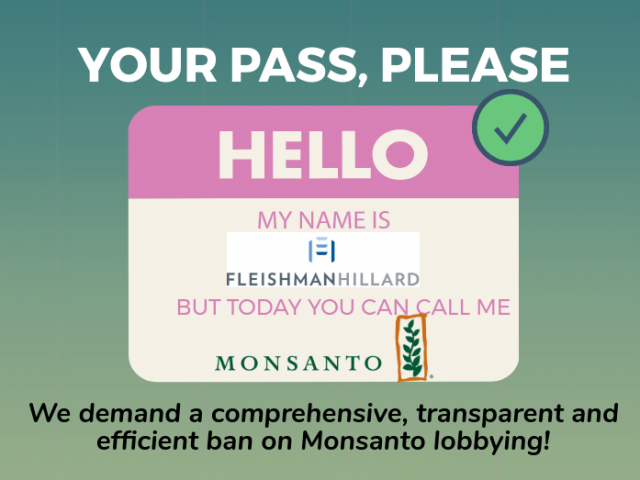 In an open letter published today, the civil society organisations welcome the decision but note that Monsanto’s lobbying efforts continue to target the European Parliament directly as well as indirectly. They urge MEPs to commit not to meet or correspond with Monsanto’s in-house or their for-hire lobbyists, neither as Parliament visitors nor outside of the institution.

Following MEPs’ vote to revoke the company’s two access badges for the European Parliament at the end of September, the institution’s quaestors have since implemented the decision. An effective ban would, however, need to go substantially beyond this step, the open letter argues.

Although Monsanto declares an annual EU lobby spending of less than €400,000, its commercial interests are also represented by a number of other lobby outfits, the costs for which are unlikely to be covered by the stated amount. Information from the EU Transparency Register shows that the pesticide manufacturer is also a client of at least four lobby consultancies, which according to their most recent set of figures billed the US firm at least €1 million for their services. Monsanto’s influencing strategy is further complemented by the work of trade associations, including the so-called Glyphosate Task Force, which is not even registered as a lobby actor.

The 24 NGOs have therefore asked MEPs to support a comprehensive and effective application of the temporary ban on Monsanto lobbyists which should include a commitment by the parliamentarians:

“For this ban to have real teeth, MEPs will need to consider Monsanto’s full influencing strategy, including who else lobbies on its behalf".
“Media are already referring to the withdrawal of Monsanto’s Parliament access passes as a ‘sort of ban’, since it is not binding for MEPs, who can still invite Monsanto lobbyists into the building as visitors or meet them outside the premises. A tight implementation of this decision will be needed to counter it.”

"Monsanto is a company that heavily relies on indirect lobbying to influence the EU institutions. The fact that the firm has lost its access badges but can still have others lobby the Parliament on its behalf is a stark reminder of how much still has to be done to implement proper lobby transparency at the EU Institutions."

"MEPs should seize the opportunity provided by the ongoing reform of the EU Transparency Register to commit to fully list their lobby meetings, to adopt stricter rules for their interactions with lobbyists and to do so for all activities covering direct as well as indirect lobbying."

Read the open letter in full, which has been signed by the following 24 organisations: