Today carefully selected politicians and members of the business community will follow Commissioner Oettinger's invitation to Austria's beautiful Alps for the seventh edition of his 'Mini-Davos' meeting, the Europaforum Lech.

In a cosy small-town setting in Lech, political decision makers get together with business to discuss the state of affairs in key policy areas. This year's topic, "EU@27 - Focus on added value", is somehow more grandiose than those in previous years, as Oettinger hopes it will "contribute to the discussion on how to reshape and sustain the European project". Interestingly, this appears to translate into gathering as many business actors as possible and to discuss, of all possible issues, industry support. Even more so than in past years, the 2018 event shows how much the privileged access of business to politicians has intensified and that related risks of corporate capture are merely seen as an all-too trivial feature of EU politics.

High-level guests from the EU Commission 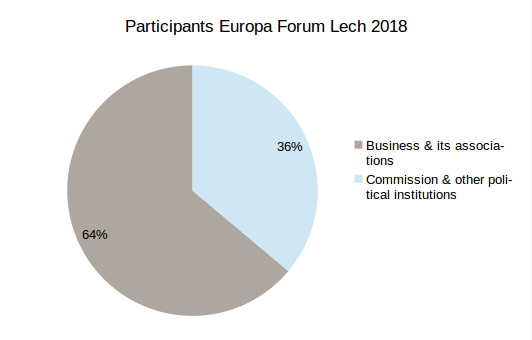 'Mini-Davos' was formerly mostly focused on digital policy, reflecting Oettinger's previous responsibility for digital politics. As Oettinger's role changed from Digital to EU Budget, so did the topic of the gathering in Lech. Unsurprisingly, this year's conference focuses on the EU budget and "supporting strategic sectors" whose "high growth potential as energy, transport, automotive and digital industry can add up prosperity while strengthening social cohesion and economic convergence".

As ALTER-EU revealed, Oettinger has the second highest bias towards business in his lobby meetings (83.3%) and seems open to receive input even comparing to his colleagues: just in his four months into the Budget and Human Resources portfolio, Oettinger held three times as many lobby meetings as his predecessor Commissioner Georgieva did in the whole of her two years in the role.

Alongside Oettinger, 14 other high-level Commission and European Parliament representatives will attend the three-day meeting, among them Commission vice-president Maros Sefcovic, responsible for Energy Union, and former vice-president of the Commission Viviane Reding, currently member of the European Parliament, rapporteur for the negotiations on the plurilateral Trade in Services Agreement (TiSA), and burdened with a conflict of interest due to her seat on the Bertelsman Foundation's advisory board.

Other EU representatives include Austrian Commissioner for European Neighboughood, Policy and Enlargement, Johannes Hahn, who is attending for the first time, and among many others, DG Communication's director general Roberto Viola.

Beyond the EU level, the guest list extends all the way to national-level representatives. From Germany alone there will be at least two participants, including a representative of the German Federal Ministry of Economics and Technology, and a member of the German Bundestag, Joachim Pfeiffer, who like Oettinger belongs to German conservative party CDU. Pfeiffer gained particular prominence when he referred to NGOs critical of the transatlantic trade deal TTIP as an "outrage industry" (German: "Empörungsindustrie") lacking democratic legitimacy.

Also present in Lech will be representatives of the Bulgarian government, which currently holds the EU Presidency, but also members of the Austrian (set to hold the EU presidency in June) and Polish governments. Curiously, the Prime Minister on Investment of Albania will likewise be at the meeting, undoubtedly interested in updates about the EU's plans for subsidising a gas pipeline crossing his country. 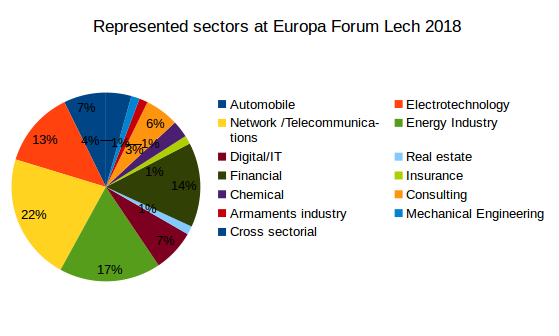 Although the Mayor of Lech is the official host of 'Mini-Davos', it is Commissioner Oettinger himself who decides on the guest list. As in the last few years, he only extended invitations to representatives of corporate boards, save for a scientist from the University of Potsdam, Germany, who somehow also found himself invited, and a visiting researcher of the University of Oxford (former Commission official). It's certainly a striking bias: Despite the high relevance of digital policy issues to consumers, representatives of NGOs or consumer organisations were left out in the cold; not a single civil society group has been invited.

In total, 108 people have been invited to Lech. "Promoting and funding innovation and digital technology" being a key panel at the Lech get-together, major players from the communications (22 %), energy (17 %) and technology (13 %) sectors will be present, such as British telecoms giant Vodafone, Russian energy supplier Novatek as well as German technology giant Siemens. As the central panel is also about funding, the strong presence of the financial sector is not exactly a surprise. Several international banks like HSBC, Merrill Lynch and insurance companies like MunichRe will be there too.

Another sector of some prominence in Lech will be the German automotive industry. It will be there with three representatives, among them DAIMLER board member Wolfgang Bernhard, as well as Joachim Kolling of BMW. Powerful German car lobby association VDA will be represented by Ralf Diemer, head of the Brussels office. Carmakers from other countries, one should note, are not coming to Lech.

À propos of privileged access: Once again at the table is lobbyist Christoph Mangold, son of Oettinger's friend Klaus Mangold, who is himself a lobbyist with good connections to the Kremlin and the Rothschild-Bank. Although head of the family's lobby agency Mangold Consulting, Christoph Mangold is – like his father – not registered in the EU Transparency Register. In 2016, Oettinger found himself in hot water after journalists exposed that he had taken a flight with Mangold Senior to Budapest in the lobbyist's private jet, an encounter which he never declared as a lobby meetings despite Mangold's stakes in EU policy.

But the Russian links do not end here. Novatek, a Russian gas producer, will also be in Lech this year. Likewise a little peculiar is the attendance of Siegfired Wolf, chairman of the board of directors of Russian Machines, an industrial conglomerate owned by Russian oligarch Oleg Deripaska. These are interesting times for Russian Machines to be attending an EU lobby fest like 'Mini-Davos' – the conglomerate has just been hit by financial sanctions in the US following the presumed Russian poisoning of former secret agent Skripal in the UK. Their participation also comes just one month after the Financial Times revealed the conglomerate's owner Deripaska had been using former EU Commissioner Peter Mandelsons' advisory services to shape international climate-change policy.

Do we even need to mention that none of these companies are in the EU Transparency Register?

All this makes the Europaforum Lech a typical example of the privileged access to EU politicians enjoyed by big business. Exclusive networking receptions and one- or even multi-day summits which sometimes even take place in EU Commission buildings (BusinessEurope's annual gathering, for example) are privileges granted exclusively to business lobbyists. All too often, this privileged access leads to biased legislation that favours corporate profit interests over the public interest.

At least some progress has been made with regard to transparency: For the second time, the list of 'Mini-Davos' participants has been made public. However, if you want to know who actually sponsors the events you will have to place access to documents requests. Last year, the event was backed by electricity company Vorarlberger Kraftwerke, Bank of America Merril Lynch, Mercedes Benz, the municipality of Lech and the Austrian federal state of Vorarlberg

Besides keynote speeches and panel discussions, there are numerous other opportunities to have a chat with Oettinger or grab the attention of the other high ranking EU representatives for a face-to-face conversation. The guest list features several unregistered lobbyists, which will surely appreciate this prime opportunity to ignore the EU's lobbying transparency rules and engage with the EU's top-level personalities.

And this is precisely the key problem of Oettinger's 'Mini-Davos' in Lech. If a Commissioner invites only business representatives to a high-level meeting on issues of great relevance to society as a whole, there is a problem. When the same Commissioner then not even provides a similar forum for civil society, while also going against EU rules for handling lobbyists, we have a situation that is as outrageous as it is dangerous. Similar to the European Business Summit that takes place in Brussels once a year, the get together in Lech is symbolic of the degree to which certain EU-Commission departments are captured by the interests of big business. Oettinger should be aware that his bias towards business puts EU integrity on the line, and that his obviously blasé attitude around this is further stoking public frustration with EU politics at large.