Will the Commission listen to criticism and finally block the revolving door? 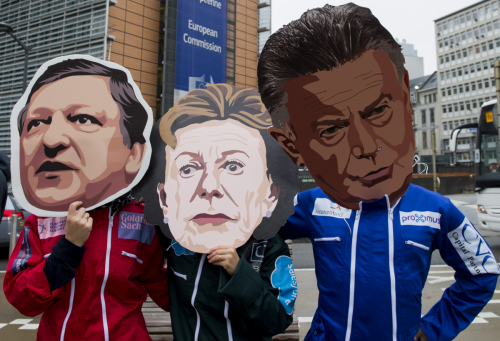 ALTER-EU reviews the disappointing Commission response when it handed in its petition about the revolving doors move by ex-President Barroso to Goldman Sachs International.

President Juncker’s Commission has been beleaguered by ethics scandals involving former commissioners. From Barroso, to Kroes and Ferrero-Waldner, the list of commissioners taking up roles in corporations with active interests in EU policy-making is long and it seems that every week there is a new case. The Commission has a systemic problem with revolving doors, but it has yet to show that it has grasped the scale of the problem, nor that it has the willingness to address the problem.

The overall response of the Commission to these scandals has been lacklustre at best. Only after two months and mounting public anger did Juncker refer Barroso's move to Goldman Sachs International to the ad-hoc ethics committee. But no sign of any reform of the rules.

Over the Summer, the Alliance for Lobbying Transparency and Ethics Regulation (ALTER-EU) joined forces with We.MoveEU and Transparency International EU to launch a petition asking for the end of the Commission’s revolving doors. More than 63,000 citizens from across Europe joined the call for tougher ethics rules and oversight.

Their voices joined with those of disgruntled EU employees who gathered over 150,000 signatures demanding President Juncker took action against Barroso.

Looking to start a dialogue with the Commission, the organisers of the two petitions coordinated to demand a meeting with Juncker to deliver the signatures and discuss our demands.

Set to deliver the petitions on the 12 October, a reply from the Commission landed in our inboxes only at 12.48 pm on 11 October! Representatives of the two petitions were invited to a meeting with Commission Secretary-General Alexander Italianer, head of the Commission’s administration.

Disappointed we had not been granted a meeting with a political actor in the Commission, we did at least hope that the Commission was ready to listen.

We arrived at the meeting surrounded by retired EU employees and staff union leaders who gave a face to the EU employees behind the second petition mentioned above (who are keen to maintain their anonymity vis a vis their employers). We were then ushered into what looked like a waiting room, a peculiar setting for a meeting.

After a few minutes, Italianer came out and everyone stood up. The EU staff representatives then expressed their frustration for not being met by someone with a political mandate and left.

Ready to finally discuss our proposals, we asked how long we would have to talk with the Secretary-General. “Just a few minutes” we were told, so we decided to better not even waste time sitting down!

What followed can only be described as frustrating. We presented our petition and demands. In response, we received nothing more than instructions to go back and listen to Commissioner Moscovici’s intervention in the Parliament the previous week about commissioners’ conflicts of interest – which in fact we had already followed. We asked for the opportunity to have an actual meeting to discuss our proposals to reform the rules. We were told to go back and read more public speeches.

The Commission’s position as presented by Moscovici contained little new: the current rules are firm, these revolving doors cases are issues of ”personal responsibility”. It is a similar line of argument to Juncker claiming he does not have a problem with the former president working for an investment bank per se, just not Goldman Sachs.

Reducing these scandals to individual morality ignores that this is a systemic problem for the Commission, as so many commissioners have taken up roles that raise the risk of conflicts of interest during and soon after the end of the too-short 18 month cooling-off period. And it is not just us saying this. The European Ombudsman has also asked Juncker to revise the rules saying:

“The [Goldman Sachs International] appointment, which the Commission has argued is in compliance with the Code of Conduct, raises question marks over the adequacy of the Code itself. It is not enough to say that no rules were broken without looking at the underlying spirit and intent of the relevant Treaty article and amending the Code to reflect precisely that.”

During the parliamentary debate where Moscovici made his speech, he was the lone voice who did not see a problem with the rules. MEP after MEP stood up and criticised the Commission’s approach on revolving doors. Indeed, after that session MEPs called for a “radical tightening up of the code of conduct for EU Commissioners”. Just this week the Parliament voted for a partial freeze of the budget for former commissioners’ transitional allowances until the Commission adopts stricter rules.

ALTER-EU and TI continue to seek a meeting with the Commission to discuss reform of its ethics rules . The Commission has the perfect opportunity to open up this process as Juncker has already said it will change the rules to allow commissioners to run for parliamentary office in his State of the Union speech (yes, we had read that speech as well!). That would be the perfect opportunity to look at the root problem of revolving doors and sort out this systemic issue. The Commission will need to start listening to its critics: none of us – MEPs, the Ombudsman, employees, civil society - are going away any time soon.